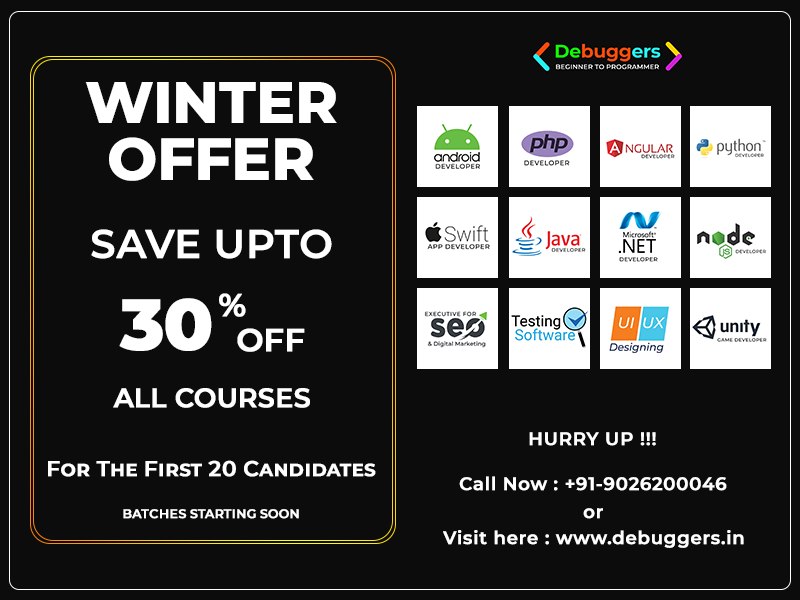 At Debuggers For 90 Days/ 3 months python Training among top python training institutes based in Lucknow. Also known for its kind of quality python training given by Working developers who developing the web-based applications. Debuggers' aim is to provide the student with the best professional training for python development.

Debuggers Python course content is based upon the industry recommendations and is regularly updated to keep pace with the ongoing technological advancements. It is one of the best & reliable Python institute that offers basic as well as an advanced level of Python training in Lucknow.

Debuggers Beginner to programer provide well proficient and experienced professional experts to train the students and make them strong for their professional careers. Debuggers provide Classroom Python training with the best lab facilities.

Python is a high-level programming language that easily and effectively integrates with your systems. It runs on almost every operating system such as Windows, Mac OS, and Linux, Unix, etc.. Since python is an open-source programming language, it can be easily used. Python programmers can program a specific function in even lesser lines using Python as compared to the other programming languages.

Python Scripting is one of the best technologies to learn and is widely used from individuals to big organizations such as Google. This Python training starts with the basic syntax of Python and continues to small GUI programs. You will learn Python data types such as Tuples and Dictionaries, Looping, Functions and I/O handling. Python training will also give you an overview of Object-Oriented Programming and Graphical application development. Python Scripting course will explain some basics modules and their usage.

At the end of the Python Scripting Training, individuals will have the skills to grow in Web-Development, GUI Application Programming, Game Development and writing powerful scripts for System Administration.

Why Join Debuggers for Python Training